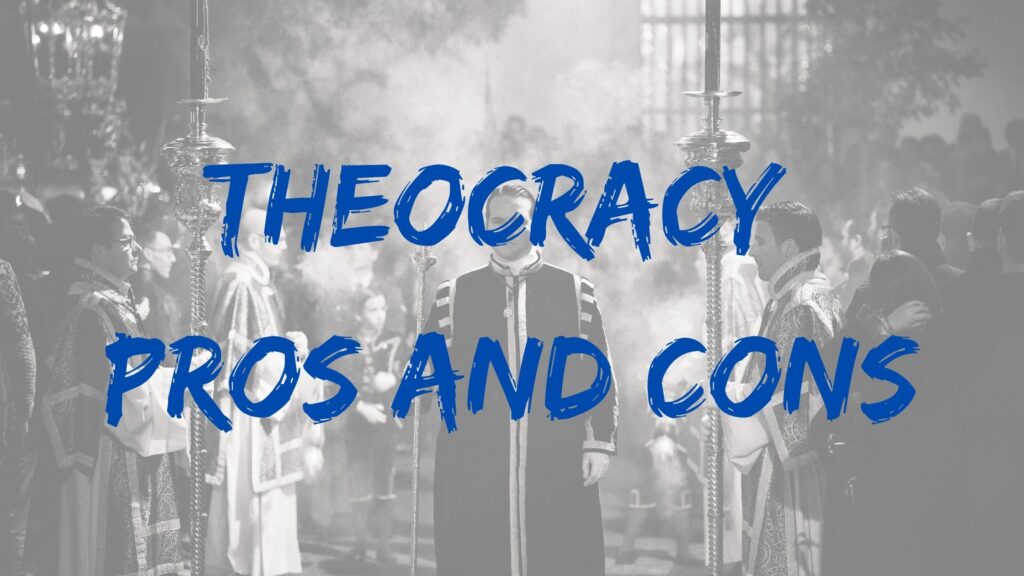 When it comes to theocracy, it is up to each society to decide whether the advantages of a theocratic government outweigh the disadvantages. Here are both theocracy’s pros and cons to consider.

Many civilizations have followed theocracy throughout history. However, because there is no separation of church and state, this method of governance has proven contentious, as laws are often based on religious beliefs, and religious leaders are granted excessive influence.

Theocracy is a type of political system in which the government delegates control to religious leaders rather than having autonomous leaders to manage the public. This indicates that governance is carried out in the name of God, Allah, or another religious entity. This political system is now more prevalent in the Middle East than anywhere else on the planet.

However, some other countries, such as the United States, practice a sort of pseudo-theocracy, in which citizens believe that their rulers of the state are chosen according to God’s will. While civilizations are moving away from this system, it continues to have a sizable following around the world.

Let us examine its benefits and drawbacks in order to determine whether it is beneficial in today’s world.

Under theocratic governance, it is often easier to propose changes to the government and have them adopted fast. Such a society is autocratic by nature, leaving little room for protracted arguments among citizens.

For a change to occur, a leader simply declares that it is God’s will, which is then accepted by the public as an unquestionable fact. After all, no one will ever challenge a deity’s decisions. Thus anything from infrastructure to social transformation can be accomplished quickly and effectively.

2. Compromises Among The Majority

Theocracy brings the majority of the country’s citizens together in a state of harmony to address the Nation’s concerns. This is due to the reason that they all base their behaviors and thoughts on a single holy book that defines how they should respond. As a result, there will be fewer discussions and more action.

Punishments are determined by the Nation’s belief system, and a citizen who commits a crime understands that his or her punishment will not be negotiated. Crimes are punishable not only because they violate the law, but they are also deemed sins. These things are not accepted in society, which explains why theocratic societies have lower crime rates than democratic countries.

All People will be able to work together without constraints to achieve the social reforms they desire if they are unified under one government and one church. The leaders of the early Mormon Church in the United States, who came out West to support their unique principles, are a wonderful illustration of this. Then, until all of their members had legally joined the United States, these religious leaders also served as government officials.

A theocratic type of governance is typically authoritarian, which means that when a top leader issues a single decree, it can quickly percolate down to the rest of the population and become law, as opposed to a democratic representation process. There will be faster action and resolution of any difficulties because the argument is discouraged in this type of setting.

Given the speed with which information is exchanged today, we must consider more than simply national, regional, or local issues. Furthermore, a global perspective is required. When theocracy is established, the country will have natural allies because everyone follows the same sacred text.

7. Compliance With The Law At Higher Levels

People who attend religious gatherings of any kind tend to be courteous. There is a widespread desire to follow spiritual rules in order to ensure that the soul eventually arrives at its designated destination. Because they believe so much is at stake, they follow all of the government’s laws and decrees, even if they appear to be immoral.

Fear may cause society to become compliant, but compliance is still compliant. The country can achieve a higher level of productivity with a higher level of control. Because they all rely on a single “holy book” that controls their behavior and opinions, theocratic governments have been observed to bring the majority of their citizens together in some form of concord over the difficulties confronting the country. From a global standpoint, this also tends to produce more cohesiveness.

Everything in a theocracy focuses on the union of state and church. Thus there will be fewer red tapes to get in the way of spending money on essentials. According to analysts, this will assist reduce hunger, poverty, and other low-income difficulties because the holy book’s dictations would be in place as a mandate of government to address these situations.

1. No Attention To Public Opinion

People who live in theocracies are often aware that their opinions will not be valued because society’s priorities are centered on the greater good. Even if individuals were granted the power to vote, there would be no difference between the candidates, who are usually religiously similar and govern in similar ways.

In most theocratic cultures, a committee of elderly holy men decides who is eligible to run for office, making it extremely difficult for the average citizen to pursue any political ambition.

2. Minorities May Not Be Neglected

In a theocratic government, if someone does not comply with the majority’s religious convictions, he risks losing his legal standing. The Jehovah’s Witnesses and the Baha’i faiths are two groups that practice this.

Aside from them, there are other traditions or denominations within a faith that may prohibit someone from holding a particular position. People in the minority would be at a disadvantage because, in a theocratic society, everyone’s thoughts and beliefs are essentially the same as the governing elite’s.

This implies they won’t have the same benefits and rights as individuals who share the holy men’s ideas, and those who don’t accept what the leaders think won’t even be considered full citizens.

Intolerance will exist wherever a theocracy is established. Because the church and the government are considered as one institution, this is the case. If someone in a country or citizen with this political system questioned their rulers’ leadership, they would be accused of questioning the supernatural entity at the center of the ruling.

Theocracy rulers have the authority to change the religious structure as they deem fit in order to meet current political needs. People’s perceptions of the end purpose of their beliefs alter dramatically as a result of such developments.

Most major religious movements are founded on the concepts of acceptance, love, and peace for one’s fellow man, but theocratic societies are notorious for being hypocritical when it comes to putting these principles into practice.

It tends to go against the fundamental objective of religion, which is to bring people together by denying residents the freedom to worship as they like while maintaining equal rights.

5. It Could Be Interpreted As Hypocritical

Many religions preach loving one’s neighbor as oneself, which would make it impossible to go to war with other countries from a theological stance, given that war is inherently violent. Other countries would perceive a theocratic administration as hypocritical as a result of this.

Because anything that is contradictory to religious ideology and dogma is considered outside of God’s favor, theocracy would ultimately prevent civilization from evolving. When we consider the prevailing administration throughout the Dark Ages, which was theocratic Christian, we can see that science was severely hampered for many years.

7. It All Comes Down To A “Follow Or Die” Mentality

You must be converted if you want to become someone in a theocracy. If you do not follow the rules, you may suffer serious consequences, including the danger of death. As a result, many people would go into hiding, face persecution, and be denied access to everything civilization has to offer. Apart from that, it would encourage the majority to bully the minority simply because they are different.

8. People Are Unable To Fully Prosper

A person’s ability to advance in a theocratic society is limited by nature. People can labor, but they will not be able to earn as much money as they could because there are few opportunities to accumulate wealth, and religion regards material commodities adversely.

9. It Considers Humans To Be Fallible Beings As

Even, if most of us believe in a perfect, unchanging God, it is imperfect humans who are prone to rage, greed, and blunders who rule over a country’s citizens, not God. No matter how devout and virtuous a person is, if he is given the authority to rule a wealthy kingdom, he may succumb to temptations to prioritize his own wants over those of others. This occurs when theocracy fails to function as an effective system of government.