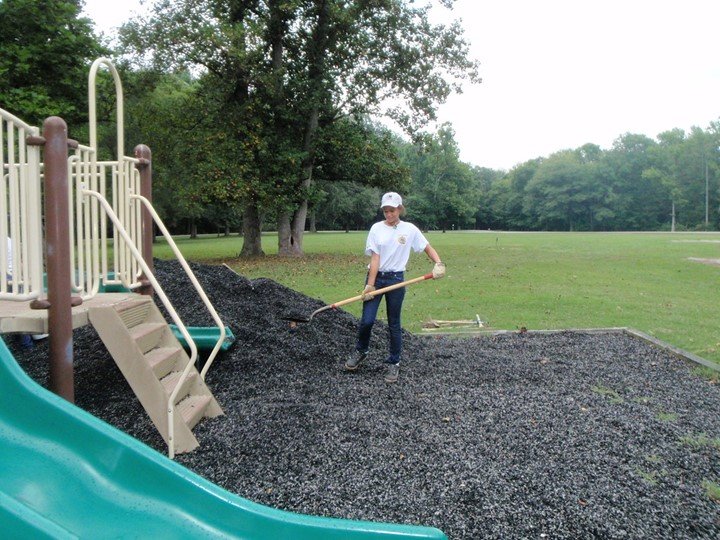 pros and cons of rubber mulch

Since the induction of rubber mulch, many methods are altered by an individual’s performance in landscaping as well as gardening in different regions. As it is known, the product is a result of recycled tires without its metal segments cut up and mixed to form a porous surface for gardens and playgrounds. However, like many products, it has its advantages and disadvantages.

1. It is more permanent; unlike other products for mulch, rubber mulch does not disintegrate quickly. It is proven to last over ten years while performing all designated tasks efficiently. Due to this, it saves one energy as well as the cost of performing the task of landscape covering regularly.

2. It conserves the environment; rubber mulch like all other recycled products is one original product designed to help the course of environment conservation. It does not require any supplementary such as natural resources like a tree for it to work efficiently.

3. It represses weed; rubber mulch restrains the growth of weed by obstructing sunlight that contributes to its seed germination. For this reason, it is suitable for places plagued by enormous weed growth as it helps to control them.

4. It preserves moisture; the rubber mulch usually does prevent sweltering of soil by hindering evaporation. Because of this, moisture preservation becomes an easy task due to efficient moisture absorption by the ground from rain.

5. It does not harbor pests; many insects that infest plants are not usually drawn to rubber mulch. Therefore this is a significant advantage since it provides massive protection to all plants cultivated in it, not to mention it saves you money for buying pesticides.

6. It holds better during flooding: Unlike most mulches out there, like the wood mulch, rubber mulch holds flood better because of its higher weight density. This is nice and a benefit to place it in the landscape or garden around your house.

10. It doesn’t attract insects: This is considered the best benefit of rubber mulch as it offers protection from insects in your garden or small landscape. Insects are not attracted to rubber, unlike wood and soil, so it is good to infuse in your area.

1. It is toxic; due to it having remnants of certain chemicals, rubber mulch can cause several damages to plants. Therefore it can be dangerous to human health primarily when used in a consumable plant garden. Also, it is proven to possess a lot of zinc, which could harm soil with a higher amount of the chemical leading to the plant’s destruction.

2. It is not natural; since rubber mulch is a product of recycled tire, it is easier to recognize it as a non-natural product. Therefore this poses as a disadvantage as many people prefer something that looks and feel more natural in their garden, playground, and other places that need landscaping.

3. Its original price is higher; compared to other products used for mulch, rubber mulch original price is more. Due to this, not all people can incorporate their use for landscaping in their gardens and playgrounds. However, despite that, the product offers a long term advantage due to its durability ability.

4. It is inflammable; since it is a tire product, rubber mulch could burn fast when opened to the elements of fire. Therefore it is not appropriate in environments that have the possibility of exposure of the same since it could cause a lot of damage and possibly death.

5. It does not decay; rubber mulch, unlike other products for mulch, is an inorganic creation. Because of this, it does not rot to offer soil with the much needed organic substances. In addition, over time it molders away to release chemicals and metals instead of inside the ground.

6. It has a high initial cost: This is a big disadvantage of rubber mulch and something that discourages persons from purchasing it. It Is 8 times costlier than wood mulch and that is a whole lot as not everyone has that sort of money.

9. It does not decompose: Rubber mulch is not organic which makes it the wrong mulch to provide organic matter for the soil. It isn’t able to decay or decompose and that is needed for plants to grow excellently in a garden.

10. It requires weeding by hand during maintenance: When maintaining other mulch like the wood or soil, you can sue a hoe or other weeding equipment, but that isn’t so for rubber mulch. There are fewer weeds with rubber mulch, so when it starts springing up, you would need to weed with your hands and that is uncomfortable for most persons.

Pros and Cons of Platform Beds