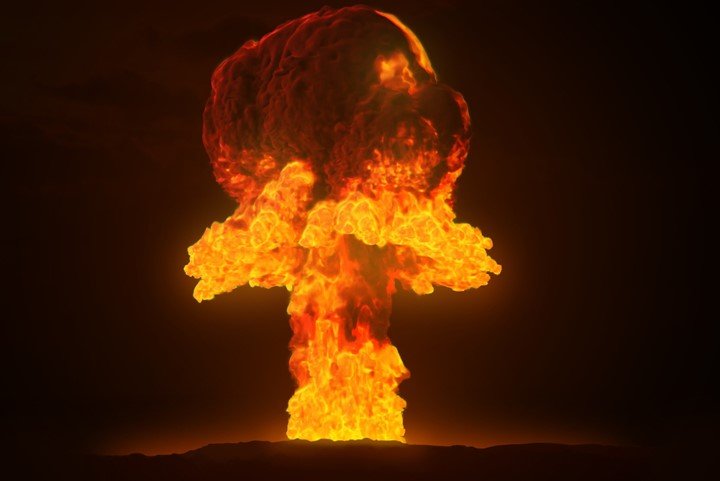 The United States was the first country in the world to develop an atomic bomb that changed the world and the course of history. Nuclear weapons came into development in early 1789 when the chemical element uranium was discovered and 150 years later nuclear fission technology was achieved. The atom bomb takes an estimated 10 seconds to form a fireball, shockwaves, and intense radiation from a nuclear detonation which have devastating effects and are capable of span within decades and generations.

The first atom bomb used for warfare was dropped in Hiroshima and Nagasaki, Japan and there were more than 74,000 casualties in Nagasaki 140,000 in Hiroshima and more than 250,000 people died in the months to follow due to radiation-related illnesses such as cancer and leukemia. The atom bomb used was lethal such that it made ground temperatures rise to a whopping 4000 degrees Celsius, created an explosive yield of around 20,000 tons of TNT, levalized more than 6.7 square kilometers of ground, and caused a downpour of radioactive rain. These lifelong devastating effects have led to an increase of campaigns to create a nuclear-weapon-free world and progress has been made by the adoption of the U.N Treaty on Prohibition of nuclear weapons in 2017.

2. Shows Strength. Nations that have developed nuclear weapons are considered powerful at the global stage and their demands are taken seriously because of their nuclear technology.

3. Saved Lives. The dropping of the atom bomb on Japan may seem unethical but in essence, It was the most effective way that stopped millions of lives from being lost from the escalation of war between Japan and the United States unlike the use of traditional military methods. The atom bomb contributed to the quick end of World War II by ensuring Japanese unconditional surrender despite it heightening the cold war and contributing to the space race.

4. Source of energy. Nuclear energy is proven to be a very efficient clean source of energy when used as a power source and can run for years without disruption and not limited to any adverse weather conditions.

6. Military Advantage. An atom bomb acts as a force multiplier and a great deterrent against any attack due to its capabilities to eliminate any threat and cripple an enemy’s arsenal. The atom bomb may reduce human casualties by guaranteeing fewer human warfighters for any given mission.

7. Diplomacy. With the creation of the atom bomb and more advanced nuclear weapons, more countries are determined to engage in diplomacy to avoid catastrophic decisions. The aspect of negotiation and diplomacy helps create a global society of cooperation promoting national development.

1. Lack of Control. The effects of an atom bomb radiation cannot be controlled within a specific area or a country’s border. There may occur accidental use of the atom bomb through human and technological errors and unauthorized use by non-state actors.

2. Environmental Damage. An atom bomb when detonated would generate intense heat, radioactive fallout, and cause massive displacement and long-term environmental damage through the spread of radiation around the atmosphere that has an impact on the global climate. Radiation contributes to the rapid cooling of the atmosphere which in turn results in ocean acidification, shorter growing seasons and this affects food distribution leading to global famines, drought, and hunger.

3. Economy strain. The production and maintenance of an atom bomb prove to be very costly and can take a toll on a country’s economy unlike when such monetary resources would be channeled to more useful goals.

4. Arms race. Country’s have been in a struggle to acquire new nuclear weapons and it’s been impossible to keep tabs on the number of atom bombs in the world since each country claim they need nuclear weapons for the strategic defense of their boundaries.

5. Destruction of Property. Due to the large scale and massive displacement caused during detonation of an atom bomb, catastrophic destruction of property arises and this would take a country year to recover and reconstruct its infrastructure which then has negative effects on the social and political landscape, economic activities, schools, healthcare amenities, and jobs.

6. Destruction of life. An atom bomb is a destructive weapon that instantly kills any form of life in a targeted area and can cause thousands of deaths and the radiations emitted thereafter can lead to more deaths within a long period. The radioactive material, blast wave, and thermal wave have far reached short-term and long-term consequences that are difficult to alleviate. It is difficult to get immediate humanitarian aid or coordinated preparedness in a populated area where an atomic bomb has been detonated due to the massive destruction and suffering.

7. Health Hazard. The testing and use of the atom bomb have led to serious health hazards caused by the ionization of the radioactive material emitted and this has adversely affected women and children. Nuclear material affects infant mortality rates and mortality rates in the general population. The rise of thyroid, lung, and breast cancer is rampant among people exposed to nuclear radiation. The radioactive waves have been found to cause impaired growth and an increase in intellectual disabilities. Radiation has caused genetic mutation to plants, animals, and humans leading to diminishing reproductive capacity, bizarre appearances, and reduced lifespan.

8. International and Regional tension. Nuclear-armed states have created regional tension due to the increasing possibility of the risk of nuclear weapons such as the atom bomb being used as part of the military and security measures of these countries. The probability of nuclear weapon use is fuelled by different factors such as broader technological developments, geopolitical changes, deterioration of the nuclear arms control legal framework, development of new nuclear weapons with novel capabilities, space infrastructure, and new missile technologies.

9. Climate change. The use of an atom bomb may bring about negative climatic changes as a result of radiation spreading in the atmosphere causing the depletion of the ozone layer, reduced growing season, and increase in atmospheric temperatures leading to global warming.