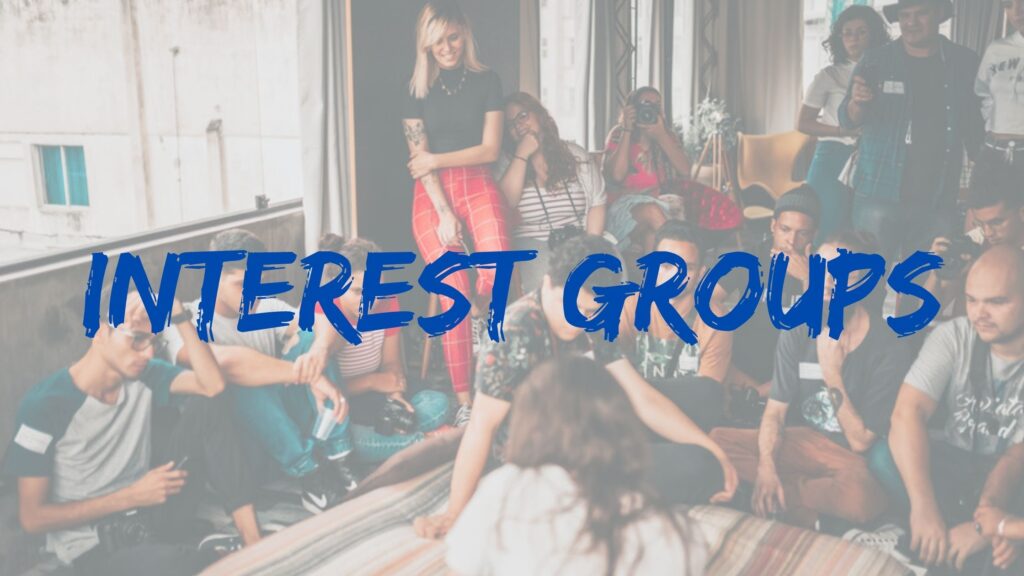 Pros and Cons of Interest Groups

An interest group is a specific group of individuals formed to overlook certain affairs of interest. The groups work together and can influence public policies and opinions. As a result, they play a big role in the development of social systems and political parties.

2. Offer positive solutions: Interest groups use their knowledge and skills to influence others. Their skills can be used to solve problems faced by particular individuals such as a political department.

5. Promotes leadership: Getting involved in a particular organized movement group that helps in the communication of certain needs to the community and influencing the actions taken allows you to be the community leader. Becoming a community leader will help get positive opinions that bring changes and also be able to help others.

6. Information access: By joining a particular interest group you will have access to a variety of resources as well as be able to interact with political leaders.

7. Collective voice: People that are in the same interest group are very passionate about one thing. Everyone that joins these groups becomes like-minded as well. These groups are very important as they help to address things that would be difficult, especially when done by one person. When they come together, they become strong enough to fight for their rights.

8. Change: The easiest way to advocate for change is via groups of interests. For example, the government may be concerned when a huge group of people gathers in the streets to protest. So many presidents have been forced to resign due to protests from huge crowds of people. They also put pressure on the community until something is done when things are not going as they are supposed to be.

9. Creates fairness in the community: The community contains people from different backgrounds. We can’t all be equal as employment opportunities are different, also there is a wide difference in terms of income. So when one group is oppressed, the interest groups help to create change by speaking for them. So everyone is offered an equal opportunity, especially in schools, healthcare, and employment opportunities are involved.

10. Politics: The special groups have made so many people interested in politics. When people show up to vote in large numbers, a good leader is elected. Besides, even if a good leader underperforms, people can come together and sign petitions for his/her resignation. Leaders that do not perform well, can easily be removed by interest groups. Also, they help make sure that the resources reach everyone and that they are sent properly.

11. Interest groups make activism affordable: The cost associated with activism is one of the reasons why businesses have remained active in special groups. Businesses hire individuals sometimes so that they can help further their agenda in the government. An average person cannot manage to do this due to the sacrifices. It’s much cheaper to express an opinion by hiring like-minded people.

1. Only the loudest voice wins: In the political environment, the size of the interest group doesn’t matter. Only those who are active and get more attention can succeed. Money also speaks loudly, therefore, those who have more resources and support can win.

2. Interest groups only focus on a particular topic: In most interest groups, they only discuss a single topic. However, you can join multiple interest groups with different discussions but your opinions and decisions might end up dividing the group instead of bringing unity.

3. Promotes harmful activities: Even though the interest groups are formed to bring positive influence, there are some groups that support harmful activities as long as they’re able to satisfy their interests. For example, in corruption cases which benefits a few people.

4. Advocates for minority instead of majority: A large number of interest groups focus on meeting the desires of minority groups instead of the majority. However, groups that focus on professional issues like the union of works can solve problems experienced by the majority.

5. Not based on an elective process: Leaders of interest groups are only nominated instead of being elected by members. Some members take up certain positions because they formed interest groups. Therefore, some nominated members are unable to represent a collective voice for all.

6. Interest groups can create political gridlock: When politicians get elected, they might be intimidated to fill the demands of the special interest groups first to shut them down. This would be unfair to the minority groups whose voices cannot be heard.

7. Not elective process: Such groups barely hold elections to choose their leaders. They just appoint an individual with a higher influence than the rest. Mostly the founders of these groups remain to be the face.

8. Money game: Some special groups are motivated by money rather than the well-being of their members. These groups are supposed to be in the front line fighting corruption and helping people. Besides, groups with no money do not get enough followers. Once you get more money, you become influential.

9. Interest groups can be selfish: Instead of pushing agendas that will help the general population, interest groups only advocate their interests. This is because they lobby only for the things that they are interested in.

10. Can change the governing systems: If a certain interest group gets a huge following, then it becomes strong enough that they may attempt to shape the government in ways that are not intended. Besides they can cause a government to fail by actively disagreeing with its plans.