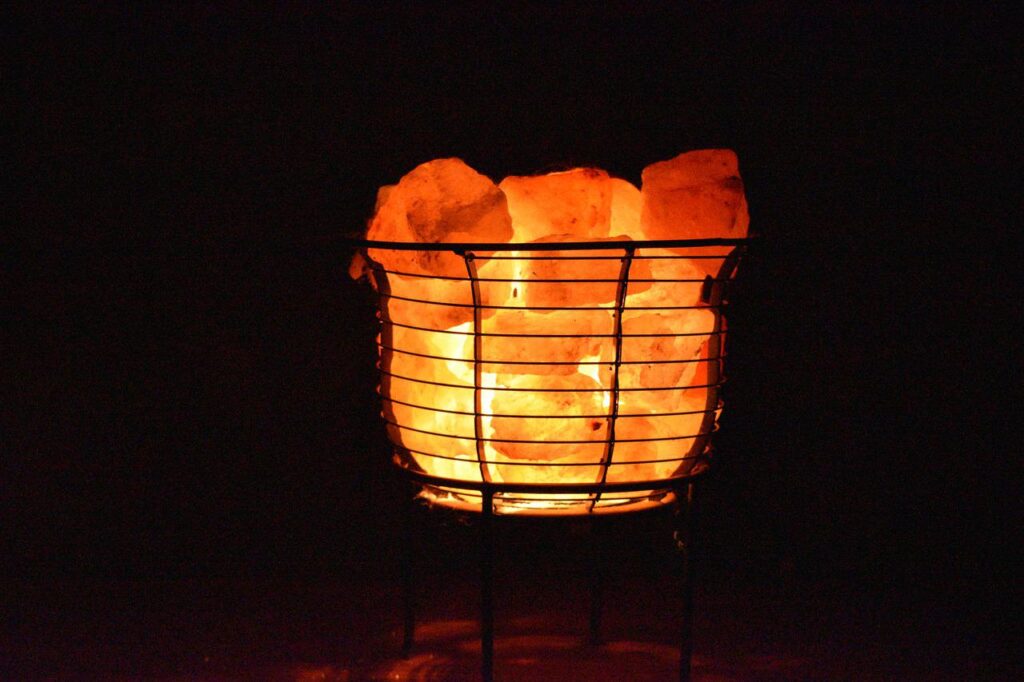 People buy these salt rock lamps as decorative things for their houses, and the stones are carved from pink rock salt found underground in Pakistan. The most crucial point is that they’re intended to supply the human body with a host of health advantages.

However, there is little or no evidence to support their claimed health advantages. Himalayan Salt lamps are a fantastic alternative to Halotherapy since they employ comparable techniques.

The air-purifying characteristics, aesthetic appeal, and various purported health benefits are all advantages of Himalayan salt lamps. These lights release negative ions, which improve air quality and help with allergies.

Salt lamps can also help to cleanse the air in your house by lowering allergies, removing smog, and generally reducing dust. Negative ions are emitted into the air when a light containing a salt crystal is turned on. Negative ions bind to dust or pollen particles before dropping to the floor or furniture. This is one of the advantages.

Due to its capacity to minimize dust by drawing it, salt lamps can help reduce airborne allergens in your house, making them excellent for persons with asthma and other respiratory ailments such as hay fever and bronchitis.

2. One of the most important benefits of Himalayan Salt Lamps is stress relief:

Stress may lead to a variety of health issues, including immune system alterations and weight gain. Negative ions in the air were found to boost serotonin levels in another animal investigation.

Humans have not yet been connected to the similar advantages of Himalayan salt lamps. Surrounding yourself with salt lamps in your home and business is one approach to creating a calmer environment.

3. Himalayan Salt Lamps are said to help with inflammation:

The anti-inflammatory characteristics of Himalayan salt can benefit people’s health. After injecting rats with an inflammatory chemical, the researchers discovered that exposing them to salt for four hours minimized any redness or swelling generated by the substance.

This shows that breathing dry air containing sodium chloride particles might help relax inflamed respiratory airways caused by asthma and other lung disorders including chronic obstructive pulmonary disease (COPD), according to the researchers.

Researchers looked at the effects of air ions in Himalayan Rock Salt for a study published in the Evidence-Based Medicine journal. Researchers discovered that persons who were exposed to salt lamp lights during
their sleeping hours had an easier time falling asleep and slept for longer lengths of time than those who were not.

Allowing more energy to circulate through your body will help you deal with stress more effectively, improving your overall health. One of the benefits of a Himalayan salt lamp is that it might help you feel more energized. It aids in the removal of ions that obstruct energy flow. Positive ions deplete your body’s energy. Negative ions from Himalayan salt lamps revitalize the body and mind.

Constant EM radiation exposure has been shown to elevate stress levels, create chronic exhaustion, and lower the immunological response, among other things. Positive ions will undoubtedly cancel out negative ions, perhaps reducing the deleterious side effects of our gadget-centric lifestyle.

Although the disadvantages of Himalayan Salt Lamps are minor, many individuals may be put off by their multicolored light. If you are light-sensitive or suffer from sleep issues like insomnia, you should seek medical advice first. The following are some more uncommon dangers associated with Himalayan Salt Lamps:

1. One of the disadvantages of Himalayan salt lamps is their high price:

A huge, beautiful Himalayan salt lamp can cost hundreds of dollars, so be prepared to spend a premium for your salt lamp. If you’re just looking for something to beautify your area, there are lots of cheaper solutions to consider.

Despite being formed of salt crystals, the bulbs are delicate and can shatter if dropped or knocked over. Small children may be harmed by the jagged glass, and anybody who comes into close touch with one of
these lightbulbs when it is hot may suffer burn damage. To minimize damage when replacing a bulb, make sure to use thick gloves.

3. Some patients may experience skin irritation:

When exposed to direct heat from the light that reaches 100 degrees Fahrenheit, some persons may have skin discomfort (38 degrees Celsius). Rashes might occur if you have sensitive skin. One of the few disadvantages of Himalayan Salt lamps is this issue. Before purchasing one, you should consider your skin sensitivity.

4. Heavy metal contamination is a possibility:

Although all varieties of salt include minute amounts of naturally occurring trace minerals, Himalayan pink rock salts may have large levels of these trace elements since they come from salt mines.

According to certain research, Himalayan pink rock salts may contain dangerous heavy metals including arsenic and antimony, which can cause health concerns if consumed in significant amounts.

5. Pets may be harmed by salt lamps:

There have been cases of dogs harming themselves significantly after knocking over a tabletop lamp or swallowing the light bulb. Your pet will get dehydrated and unable to make pee if it consumes too much salt.
This illness will cause renal failure and death within 24 hours if not addressed quickly.

6. Can Easily Be Broken:

Minerals strengthen salt crystals; without them, the crystals would be fragile and susceptible to shattering. White salt lamps are frequently advertised as having the purest vibrations, yet they are also the most
delicate.

Please note that a white Himalayan salt lamp does exist, however it is incredibly unusual and much more expensive than the colorful ones. If you come across a white salt crystal lamp that isn’t significantly more
costly than the pink/orange variants, stay away because it’s most likely a fake.

Himalayan salt lamps are a popular home decor item that helps to purify the air and improve your health. These light negative ions can assist persons with asthma and other respiratory problems and lessen
inflammation.

They also have mood-boosting qualities and, when consumed before bedtime, may enhance sleep quality. If you’re interested in purchasing one of these amazing items, make sure you figure out what size is appropriate for you before clicking “order.”