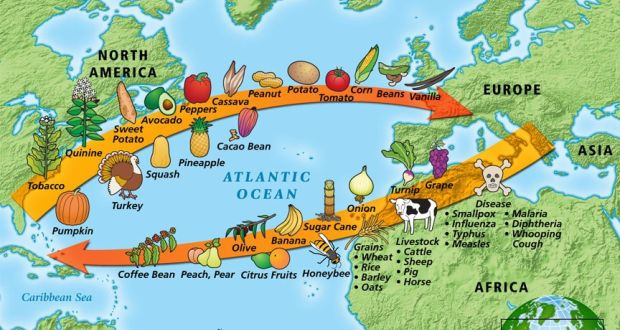 Columbian exchange Or Columbian interchange are two synonymous terms that refer to the 15th and 16th centuries when Christopher Columbus made his voyage through the Atlantic Ocean. This was when the transfer of Livestock, plants, cultures, and humans took place at a massive scale among America, West Africa, and the old world. This is also known as the period of European colonization. Although this event is as old as the 16th century, the term ‘Colonial Exchange’ was first used by Alfred W Crosby in 1972.

1. Agricultural Exchanges: The crops like Potato, maize, and Tomato, which were once limited to America and not grown outside, Columbian exchange spread worldwide. Now, these were popular and important in countries like India too. Tomatoes, which were Italian ornaments, now came into Spain. Fruits like Citrus and Grapes shifted to America from the Mediterranean, and Rice was another crop that paved its way widely.

2. Sharing Of Technology: When the two parts of the world got together, it spread Technology and advancements. Compass and maps were among these tools which simplified the lives of people in navigation.

3. Nutritional Improvements:  Europe was not supportive enough to fulfill the nutritional demands of its population. But this was the Columbian exchange, which came as a boon to change its landscape. Due to Europe’s exchange of crops, the mortality rate declined, and life expectancy rates took a flight.

4. Livestock Introduction:  The arrival of Livestock transformed the lifestyles of the Hunters and Gathered tribes to nomads. Now they were not only dependent on plant sources and legumes for their protein requirements. They started farming and rearing animals like cows, goats, horses.

4. Cultural Exchange: This is one of the most significant factors of the Columbian exchange. Meeting different groups of people brought different minds together, which joined them. They started sharing each other’s ideas and emotions. This was responsible for communal harmony and brotherhood. Sharing of cultures wielded different options before them, which simplified their lives and lifestyles.

1. Communicable Diseases: This is the most serious factor in the Columbian exchange and negatively affected the world. Contacts among different groups of people spread infectious diseases, which were confined only to a small area. Smallpox was one among them, which destroyed a major part of the population. Humans and animals were equally suffering from these grave diseases, and the land pieces turned into graves correspondingly.

2. Agricultural losses: Although the transfer of crops from one area to another area sustained human lives, it was very difficult for many plants to acclimatize to the different environments. Some new species of plants became invasive and spread across a large area. Many species of rodents and pests harmed crops and affected agriculture adversely.

4. Slave Trade:  Many people from Africa were transferred from Africa to America as Slaves. This journey is also known as the middle passage. These slaves were subjected to inhumane treatment and being exploited in many works.

5. Clashes: No doubt, culture sharing introduced the concept of brotherhood, but it was not the same throughout. Many regions witnessed clashes on behalf of religion, lands, and property. This period reported the cases of murders, slaveries, and suicides too.