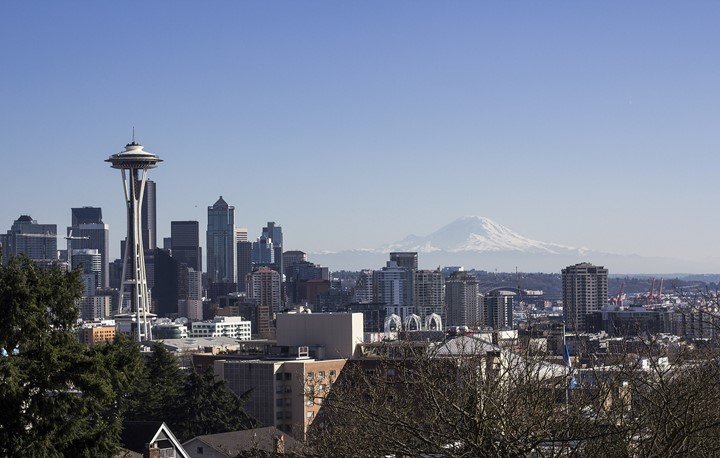 Seattle is also known as the Emerald City boasts of its beautiful natural landscape, cultural diversity, booming industries, and fast-paced growing thus making it so desirable to live in. It’s considered the second healthiest city in the United States due to its high-quality produce of food products and a great sports culture.

Seattle has a lot more great and successful entrepreneurs who make this City attractive for high-tech businesses with plenty of capital to invest. Seattle is characterized by beautiful scenery due to its regular rainfall, good public transportation network, numerous outdoor recreational activities, and breathtaking mountain views to explore.

1. Job Market. The high-tech industry job market in Seattle is blooming and this leads to an increase in employment rates. The minimum wage in the city is above the national average due to the high demand for a skilled workforce.

2. Food. Seattle is one of the best food cities with a scene that is rich in diversity, accessibility, and quality of food products. They have popular kinds of seafood which are always fresh due to their proximity to the water bodies. Some of the best restaurants are located here and they offer one the best mouth-watering multicultural cuisines in the United States. The most famous public market is the Pike Place Market which offers a wide range of fresh foods products and all other sorts of items not limited to food.

3. Healthcare. The best healthcare providers are found in Seattle and provide quality care, use of the latest modern technology, and great infrastructure. There is ease of access to a hospital since they are located almost everywhere in the city.

4. Retailers. The Port of Seattle and Seattle-Tacoma International Airport play a great role as a major hub and gateway for retail trade in the Asia continent thus promoting its corporate diversity. In addition, Seattle hosts large in-house retail names such as Nordstrom and Zulily.

5. Transportation Network. Seattle has the best public transit network in the United States despite it not having a subway system. There is the availability of public buses, railway lines, taxis, and carpooling services that play a major role in the transportation network in Seattle.

6. Dog Friendly. Dog lovers are highly welcomed in the city since the people here love their dogs and move around with them almost everywhere. It is a very common feature to find dogs in parks, restaurants, cafes, public transport, and on the streets with their owners enjoying a beautiful and relaxed time.

7. Sports Culture. If you are a lover of sports, then Seattle is the city to be because how individuals seriously and passionately love sports and are very supportive of their favorite clubs and teams. The city is home to professional teams which include baseball, basketball, football, ice hockey, and soccer. The most recognized teams are the Seattle Sounders Fc, Seattle Kraken, OL Reign, Seattle Seahawks, Seattle Storm, and Seattle Mariners.

9. Nature Trails. With the lush natural landscape, there are lots of places one can go for hikes and nature walks and enjoy the beautiful scenery of the city. The city prides itself in having more than 500 parks covering over 6,400 acres of land.

10. Tax. The City does not charge income tax on personal income, social security income, and transactions on retirement accounts. Unlike other cities, Seattle has a lower sales and property tax rate even lower than the national average tax.

1. Cost of Living. Seattle has a high cost of living expenses due to its exorbitant costs in housing, food, and transportation. However, these high living costs can be offset if you happen to find a steady and well-paying job.

2. Housing. The housing market seems to be on the higher end due to the rapid expansion of the city and population increase. Rising high costs may lead to a growing population of homeless people. The homeless population in Seattle is ranked as the third-largest in the United States despite efforts being made to avert this disaster of homelessness by providing homeless shelters not so many people have been able to access this aid.

3. Traffic. The city experiences one of the worst traffic snarls up in the country especially during rush hour where everyone is nearly at standstill. Due to such traffic jams, the larger population prefers using the already well-established public transport network to avoid driving through chaotic traffic. The city of Seattle is rapidly expanding and they are making efforts to constantly keep up with transportation networks and the amount of construction and repairs being done mildly helps to fix the traffic menace being experienced occasionally.

4. Weather. Seattle has a rainy climate and this would prove a little bit harsh for an outdoor person. The temperatures are too cold all the time and constantly drizzling. Seattle experiences very cold, cloudy, overcast, and wet winters while in the short summertime the weather is warm and dry. With such weather conditions, residents rarely enjoy the hiking trails that are naturally provided by the landscape and during the summer these nature trails tend to be overcrowded thus a less enjoyable experience.

5. Tax. There are high tax charges in Seattle making it stressful for individuals thus some people opt to lower their living standards so that they can save more. However, individuals do not pay any income tax on personal income. Washington State does collect 7% on sales tax and 1% on property tax.

6. Crime. The city has a crime rate and its most common form of crime is property crime and car theft. The amount of crime keeps going down significantly and this makes most people feel a little bit more safe living in Seattle.

7. Diversity. There is a lack of racial diversity in Seattle city since the high population consists of whites and an upcoming Asian community.

8. Natural Disaster. A major fault line runs right across the city making it a possible risk of a naturally occurring disaster such as earthquakes, tsunamis, floods, and volcanic eruptions. This city is close to five active volcanoes which are however considered low risk.

Pros and Cons of Living in Canada

Pros and Cons of Living in New Mexico