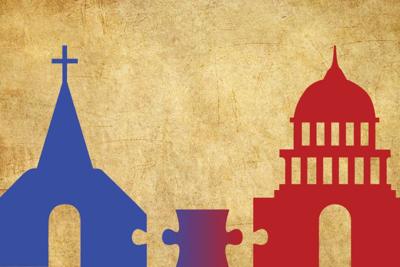 separation of church and state

According to the constitution of the United States, there must be a separation of church and state. The establishment clause states that ‘the congress shall not make any law regarding the establishment of religion or prohibit any free exercise thereof. It gives the citizens the right to religious liberty and the freedom to reject religion if they wish to.

1. No election of politicians based on religion: Separation of church and state ensures that no politician elected based on the religion. The citizens elect leaders freely without influence from religious leaders.

4. Ensure churches do not take an active role in governing: Allowing churches to participate in governance can affect the implementation of certain government policies. Therefore, separation ensures the government focuses on its mandate without interference from the church.

6. Public schools won’t be forced to a particular religion: Separation of state and church ensures certain religion is not imposed on children in public schools. Children have the right to choose their own religion.

7. It stops influence: church and religion and can be compared to a couple who need separation in order to live well. Moreover, they become more effective when they protect one another. Separation of church and state has helped to prevent national religion. This could make parents take children in schools that have a national religion. As a result of this, employment would only be issued to those who belong in this religion. Other individuals could not get equal rights and freedom like the one in the national religion. Separation has helped families to make the right decisions when it comes to faith.

8. Promotes respect: respect is the paramount thing that should be practiced by individuals. Government and church are like parallel lines. However, independency makes the two become effective. In addition to that, it promotes respect between the two. The government can make laws without being criticized by the church. Also, the church can make decisions without interference. This helps to carry out efficient duties without fear. Without respect, the two will divide citizens. The division of people can cause political instability and crimes in a country. The most country fails because the church and state are fighting.

10. Protects the minorities: the separation helps to protect minor churches whose voices cannot be heard.

11. Prevents division: the good state is not supposed to take one side. It should support all regions. Similarly, religious groups should not support a candidate and oppose others. Believers should have the freedom to participate in politics and vote for their preferred candidates. People are church and division will affect the country.

12. improves moral behavior: the government cannot establish enough jails for lawbreakers. Therefore, moral behavior can only be promoted by the church. The community depends on religion to bring morality. It is not easy for the state to control desires and hope in the human heart.

1. The government takes advantage of separation: If the church is not involved in the lawmaking process, the state will have absolute power to make and execute some unjust laws that may lead to hatred and segregation of people.

2. Limits individual freedom: Individuals can seek employment through local, state, and national governments. If an employee acts as a government representative, he cannot work as a religious representative at the same time.

4. Creates limitation to both the church and state: Separation limits the scope of work each entity accomplishes. As a result of separation, some religious education may not be enforced in schools. As a result, children will not learn good morals in schools.

6. Creates division: Separation may create the vision within the society since some people in the society will only support individuals of a certain faith.

7. Corruption: the major challenge that faces the government and church is corruption. Leaders misuse the funds for their own stomachs. For instance, government representatives can claim to have donated money to church which is not true. On the contrary, the church can be given funds by the government and end up misusing the funds.

8. majority wins: it is hard for the government to put laws and programs that people wish. The majority wins despite the effects of the decision on the rest of society.

9. CLack of national agreement: it is not easy to come up with a national decision on ethics and moral standards. For example, the church does not accept taking life. on the contrary, the state can argue that anyone who kills must be sentenced to death.

10. Misappropriation of funds: churches are not included in income taxes. The governments help the church by giving out the taxes collected. However, religion can use this money to get rich instead of using it for charitable activities.

Pros and Cons of Rubber Mulch