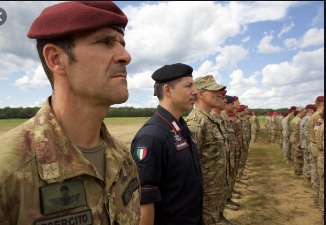 Anyone considering joining the military has to equip himself with enough information about what to expect, especially from different branches of the military. If by any chance, you want to make that decision, the chances are high that there are many things that you may not know about the three branches of the military, which include army, navy, and air force. However, the choice depends on a person, and one should consider the pros and cons of each branch before making the decision.

1. The green machine funded; the government takes the responsibility of funding the facility to the fullest since it is one of the major priorities of the state. Therefore, all the military officers are employed on permanent and pensionable terms.

2. Fast promotion opportunity to an individual; if there is any job that one can get a promotion faster, it is an army job. You do not need to get 20 years’ experience to get that promotion. The army promotion tends to be very quick and with good pay as compared to other jobs.

3. The army is the largest branch of the military; in this case, chances of getting into this military branch is very high.

4. Proud history; many people would always prefer associating with army jobs due to its good history. For this reason, many prefer this kind of job.

5. Nice duty stations; the army officers tend to live in strategic locations where they can report to the working station any time of the day, thus serving a convenience purpose.
6. Good living condition; the living standard of army officers tend to be good, and it creates a stable family.

7. Subsidies and Reduced cost of living: The military offers to the house but there are. other subsidies that reduce the coat of living. For instance, your cost of housing will be subsidized if you live outside o the military base. The cost of groceries like food and gas are cheap within the camp. But the cost is subsidized for those who are off the camp. With this, families would enjoy a lower cost of living.

8. The branches are well-equipped: Another notable pro of the military branches is that the stations are always equipped with sophisticated arms. While there, you are assured of immense security and protection.

9. Sponsorship of education: The military branches offer educational assistance to military officials, as well as their family members. This includes financial support for enrollment, tuition, and other additional charges.

10 Chance to experience other places: The various military branches offer the opportunity for officers to travel to other places. Officers as well as their immediate families are able to experience life and culture in other places. This has a great impact on the lives of the spouse and children of the officers.

1. A joke on the standard; sometimes, these kinds of jobs may be the biggest con since you will not get what you hoped for within the shortest time without determination.

2. Lack of motivation may become a blow to many; since most people get into these jobs with the primary aim of getting good pay, some may be disappointed.

3. Lack of freedom; after joining the army, you are restricted from some freedom due to some job restrictions.

4. Potentially dangerous; the army recruit normally face the danger of going into combat which proves to be dangerous, and some are prone to injuries or even death.

5. Intense training; these people normally undergo hard training which may not be bearable to others. The housing facilities provided to the officers are not pleasant.

6. Long deployment; the officer may be deployed for a very long period meaning that you will spend much time far from people you love.

6. Instability because of constant movements: The military branches involve regular transfers from place to place. This can take place every two or three years and sometimes, yearly. This implies that you alongside your family will have to move. This constant movement cripples stability and consistency. Lots of additional financial and emotional stress comes together with these movements.

7. It affects the relationship with others: The constant movement and regular transfers in the military branches can make it difficult for the officers to maintain relationships with friends. They spend short periods in a particular, and before you know it, they are out! More so, the kids may struggle to cope with having new teachers every now and then.

8. Less time to bond with family: The various military branches are I interns of working schedules. The officers can be called up to work at any time. The working duration are not even regular. These varying workings hours make it difficult for the officers to schedule a time for their families. The spouse and kids are likely to have different schedules time. But with the inconsistency in working duration, officers usually struggle to stick to schedule and time with their spouse and kids. More so, a breakdown in communication might set in.

9. Inadequate support : The support system in the military branches is poor. This can happen if you were deployed to a strange place or.country where the connection is not possible. You will lose out in terms of communication with your relatives and spouse. This can be very painful for your loved ones, especially if they have bo idea about your movement. They can face serious psychological and emotional pains because of the inability to communicate with you.

10 Difficulty in reintegration: Most officers stay away from their families and loved ones for long periods. Normally. They would struggle to reintegrate or regain the closeness with their relatives when they come back from their deployment. It would take time to get back the closeness and bond that was there between you and your spouse likewise your children. It can lead to serious anxiety between loved ones as the reintegration period can be very frustrating.

Tags: advantages of being a army, pros and cons of army branch

Pros and Cons of Welfare